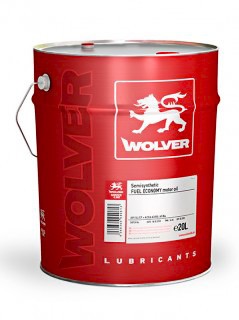 WOLVER Turbo Evolution 15W-40 is a highly effective engine oil of a new level of modern vehicles and stationary engines, which is a product of the evolution of API CI-4 oil (2002 publication) to higher requirements of ACEA E7 (2016 revision).

WOLVER Turbo Evolution 15W-40 is produced with the use of an advanced and balanced additive package - Stable Protect, which allows to ensure optimum productivity, thermal, viscosity and antioxidant stability during a long period of exploitation.

WOLVER Turbo Evolution 15W-40 is especially effective in engines of commercial vehicles, medium-loaded engines of main trucks, agricultural and quarry equipment. Complies with the current environmental standards EURO 5/4/3 and can be used in engines with EGR and / or SCR exhaust gas cleaning technologies without a particulate filter.

Wolver Turbo Evolution SAE 15W-40  is assigned to category 2 of used oils and thus is free for disposal.

This site use cookies to provide you with the best experience on our website. If you continue to use the site without changing your settings, we'll assume that you are accept our Cookies and Privacy Policy. You can change your settings at any time by referring to the help menu on your browser.